Each day here at Manu Wildlife Center we meet for breakfast at 5:00, with a 5:30 departure for the day’s outing. There is little privacy even with separate cabins, as they are largely made of screen, and you can hear others in nearby cabins, their alarm clocks and other noises as they stumble about in the pre-dawn darkness.

But it also allows the wonderful dawn chorus to enter your cabin uninhibited. The dominant song while we were here was the Hauxwell’s Thrush. Here it is, recorded while I was still lying in bed. You can also make out distant howler monkeys and a Cinnamon-throated Woodcreeper.
As the plan has it, we have this one last early morning on a trail that begins downstream, but only 10 minutes away. It’s the Cocha Nueva trail that passes through a very nice stand of bamboo with yet more specialties.
The trail through the bamboo is very tunnel-like but there is usually a lot of light. 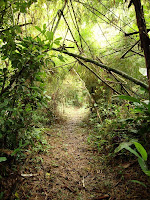 There are relatively few tall trees, as the bamboo would not do well in their shade. My guess is that bamboo quickly takes over an area where the trees die from either being stranded after an oxbow closes, or flooded when a new one is opened. Either way, for the 15-20 years while the bamboo grows (it dies after blooming), it must also inhibit the development of rainforest tree seedlings, which need light to grow big.

But though there is plenty of light for birding, it’s also very dense, and birds have to be relatively close for you to see them. 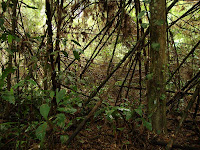 There were a few gaps, allowing us to see some canopy birds too. I tallied 98 species on our 5 1/2 –hour walk. We didn’t actually go very far, taking time to iPod things in and retracing our steps when it sounded like flocks were passing near. Highlights were Dusky-tailed and Large-tailed Flatbills, Striated Antbird and Yellow-breasted Warbling-Antbird, Flammulated Bamboo-Tyrant, Peruvian Recurvebill (heard only, unfortunately, but still makes a clean sweep of the world’s two recurvebills for me – and within 7 weeks of each other), Bamboo Antshrike, Rufous-headed Woodpecker (my third for the trip), Curl-crested Aracari (a troop of 6 birds), and Black-banded Woodcreeper.
This interesting cup fungus was growing on some decaying wood in the understory. 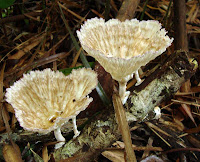 There are some bamboo-specialist butterflies too; that is, their caterpillars feed on bamboo leaves. Many of them are satyrs, most of which feed on one type of grass or another. This one is Harjesia blanda. 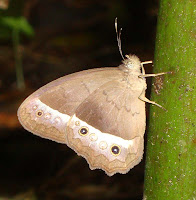 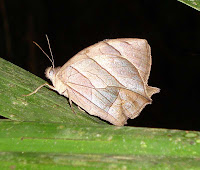 Back at Manu Wildlife Center for the afternoon, Gary took the group up the Ccollpa Trail while I went back to the Grid – the series of trails set 200 meters apart to the NW of the lodge (see the map in yesterday’s blog).
When I first visited the Grid on our second afternoon here, I placed a few stems of Heliotropium, which I had gathered from near the river bank, on some branches by the trail. I had seen before how many species of clearwing butterflies will flock to this plant to take in the pyrrolizidine alkaloids present in almost every plant in the borage family. Heliotrope seems to have quite a bit of them. The problem is that the plant grows in the sun, and these butterflies live in the forest understory. So you have to take the plant to them.
This is what I found, after the plant had been hanging for two days. Bonanza! But now I’ll have to spend hours sorting through them to figure out what genera and species they all are.

I also came across this frog in the genus Leptodactylus, a notoriously confusing group of frogs, easier to ID with voice. 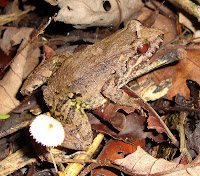 Posted by Birdernaturalist at 1:59 PM