Today is a travel day. But with little desire and no need to waste the best birding time on a boat, we had a couple more hours on the trails at Amazonia Lodge.

We returned to the oxbow lake (cocha is the local word) with the Hoatzins and walked along the trail that borders it for about ½ mile.

There are a few birds that prefer the dense growth along water, such as Silvery and Band-tailed Antbirds. While Gary played iPod at these, I wandered back down the trail and spend some time with the Hoatzins. 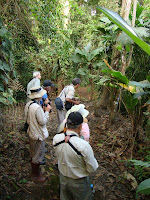 Here is a minute and a half video of the Hoatzins. They are an amazing bird, unlike any other in the world, perhaps the most unusual bird in the world. No one is sure exactly what their closest relative is, though they are usually placed near the cuckoos in the list. They are the only ruminants among birds, meaning they have a muti-chambered stomach with special enzymes to digest the leaves they eat. In other words, their gut is more like that of a cow then of any bird, and they reputedly smell like a cow. It turns out we – and all animals and birds – have the gene that codes for the enzyme needed to help digest cellulose. But it is turned "off" and not in use in any but ruminants such as cows....and the Hoatzin. Hoatzins live in dense vegetation over still water. The escape route of the defenseless young when threatened by a predator such as a monkey or snake is to drop into the water. From there they can use a claw at the bend of their wing (think Archaeopteryx) to climb back into overhanging vegetation. The repeated b-flat in the background is Cinereous Tinamou, and at the very beginning you can hear Dusky Titi Monkeys.

A great bird highlight today was an Amazonian Umbrellabird that we would have never seen had we not stopped to look at two Double-toothed Kites that flew into a small tree over the trail. Great bird.

I paused to photograph the hive entrance of these stingless bees in the genus Trigona. They have a highly valued honey.

By 8:40 we were boating down the Alto Madre de Dios river towards our next destination. Along the way we passed by Pantiacolla Ridge, a tantalizing look the outermost ridge of the Andes, and one that holds some really interesting birds.

We passed the confluence of the Manu River and then the small town of Boca Manu.

Downstream from here we were on the main fork of the Madre de Dios river, which eventually flows into Bolivia, joins the Beni and Mamore Rivers to form the Madeira, one of the major southern tributaries of the Amazon. In just over six hours of boating we arrived at our destination, Manu Wildlife Center.

Until now, the most we’ve ever stayed in any one hotel is 3 nights. And in six of the hotels/lodges so far we stayed but one night. But here at Manu Wildlife Center we were staying 6 nights, with five full days in this part of the Amazonian lowlands. Much to look forward to.

I had time to wander the grounds on my own a bit and found this interesting leaf beetle. And this brown katydid, roosting in a position it thought was sure to fool any predator. It had worked so far. 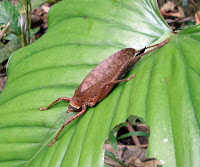 A view of the Madre de Dios from the banks by the lodge.

I estimated the river to be about the size of the Willamette near Corvallis, Oregon. This is only half the river, as it divides in a gigantic meander just upstream from the lodge. This sentence is a link to a Google Map showing the location of the lodge.

Posted by Birdernaturalist at 4:06 PM