This was our second and last full day at this lodge. The rooms are simple, but very clean (bathrooms and showers are in the building next door), and down time is spent on the porch in the comfortable chairs that overlook the Porterweed hedge and hummer feeders. Like yesterday, hummer activity was nonstop, with Rufous-crested Coquettes almost always present. Amazing. I wish we had a couple more days here.

Dawn began with a downslope breeze bringing an interesting fog over the ridge just above the lodge. 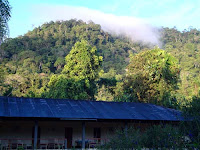 Tearing ourselves away from the bird activity at the lodge (mostly species we had seen yesterday), we spent the first half of this day on the Bamboo Trail, where several specialties occur. Here we are heading down through the Gynerium cane stand to the bamboo.

I didn’t manage any bird photos today, but the birding was excellent. In fact, 163 species made for the birdiest day so far yet, and all this was on foot and never more than a mile from our rooms. As yesterday, I more often lingered well behind the group rather than stand by unhelpful and with my hands tied as Gary played iPod at one bird after another. And as in previous days, I managed to see quite a few butterflies too. 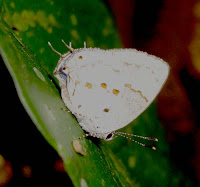 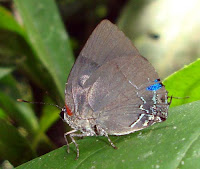 Now for some metalmarks: Eurybia caerulescens, typically clinging to the underside of a leave with its wings open.

Eurybia nicaeus. These last two are “sheenmarks,” and their larvae feed on the flowers of the prayer plant family (Marantaceae). The adults have the longest proboscis of any butterfly.

Though it’s only a few millimeters long and doesn’t look anything like the others, this Gyas Jewelmark, Sarota gyas, is in the same family. Its caterpillars probably feed on the tiny mosses and liverworts that grow on leaves. 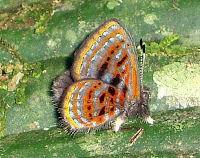 This metalmark, Setabis pythiodes, behaves much like Euselasia by perching under leaves with its wings close. 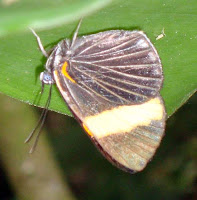 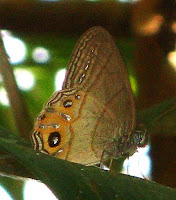 One of the few skippers I managed to photograph was this Milanion leucaspis.

This huge “helicopter damselfly” seems to be a pretty good match for Mecistogaster jocaste.

Some of the other great birds we saw were Johannes’s Tody-Tyrant, Plain Softtail, and Manu Antbird. At the end of the trail is an overlook of the little stream, and Ann Chasar spotted a Little Ground-Tyrant right across from us. And then I spotted a distant White Hawk soaring over the ridge.

I lingered on the trail well back of the group as they returned to the lodge, and I bumped into a gorgeous Rufous-headed Woodpecker and an Emerald Toucanet, both good birds to see. I was sorry there was no one to share them with.

After lunch, rather than join Gary and the group returning to the Bamboo and Creek trails, I decided it was best for me to learn some of the other trails, including the one going to the top of the ridge. It was by far the best birding afternoon of the entire trip. Once at the top, after passing through a Round-tailed Manakin lek, my nose alerted me to a White-lipped Peccary herd. Before long, I was hearing their grunts and tooth popping and eventually had good looks at them. But their smell was so overpowering (like well-aged sweat and urine mixed with an ripe pig-like musk), I felt I was going to nearly pass out a couple times. I estimated there were about 50-75 animals, but it was very hard to judge.

Then I came across a mixed flock of birds that would have registered on the Richter scale. I knew I wasn’t going to be able to pick up on everything, so I left my digital audio record running for the 40 minutes that I was with it (in the process creating a 99 MB mp3 file). Perhaps the best bird I saw and recorded here was a Spectacled Bristle-Tyrant, rarely seen by any of the birding tour companies, but Sooty Antbird, Rufous-tailed Antwren, Carmiol’s Tanagers, McConnell’s Flycatcher, and many others made for an exciting time.

I then spent about 15 minutes on the small canopy tower that is right on the ridge, offering a view through the trees of the lodge below. 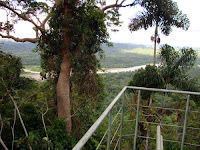 The bird highlight from here was in the form of three White-browed Purpletufts, a strange little treetop bird of the Tityra family, with a barely-visible purple tuft of feathers sticking out from under the wing.

This was probably also my best antbird day ever. By the end I had seen 20 species of thamnophilids.

Posted by Birdernaturalist at 3:24 PM