So we came all this way to Manu Wildlife Center, a lodge with one of the largest bird lists in the world, and we spent almost the entire day on another lodge’s property. As it turns out, at Manu Wildlife Center itself there is little more one can do than walk rainforest trails. And if you want to build a big bird list, you have to visit different kinds of habitats – trails accessible only if you go by boat.

At the end of our forest walk, we arrive at the observation blind. 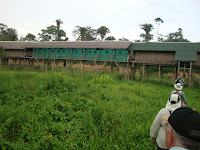 The view from the observation blind when we arrive at about 6:15 a.m. isn’t immediately impressive, but the sounds of hundreds of parrots echoes across the oxbow. 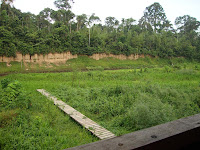 Before long, numbers began to congregate on the dirt cliffs above the opposite side of the drying-up oxbow. These are mostly Blue-headed Parrots, but one can see to Mealy Parrots and a few Orange-cheeked Parrots. There were hundreds more up in the trees, screaming, cooing, jostling for perches, preening each other, and generally having a good time. 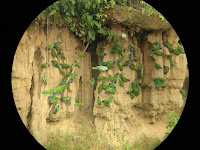 Finally, after about an hour and a half, the ever increasing numbers of Red-and-green Macaws began to descend from the treetops to do the same. 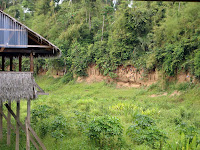 It’s long been theorized that they are coming for minerals in the clay that help to neutralize toxins found in the seeds and nuts they eat from the rainforest trees. It’s a wonderfully complex and romantic theory, but recent research has shown that they’re actually just coming for the salt after all. 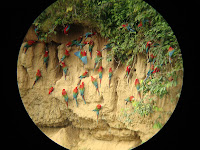 Inside the observation platform is a photo gallery of birds and animals from the region. But I noticed a potentially fatal mistake: This photo is actually of Micrurus spixii, a TRUE coral snake, and one with a venom that could surely cause death in humans. I sent an e-mail to the lodge to let them know of the misidentification. 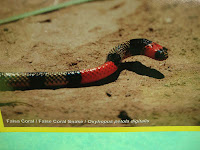 On the way back to the boat, I noticed this lovely little grasshopper.

We crossed the Rio Madre de Dios to the north bank, walked a trail for 15 minutes, and arrived at an oxbow lake. This kind of habitat hosts many birds that do not use rainforest. In fact, the Pale-eyed Blackbird is known from here and just a few other oxbow marshes in Peru. We saw it well, along with Black-billed Seed-Finch, Purus Jacamar, many Hoatzins, and Black-capped Donacobius. 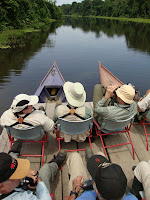 It was a peaceful ride, no roaring motor, just Carlos and Pancho paddling behind. 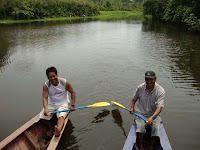 A Flame-tailed Pondhawk, Erythemis peruviana landed on the platform. 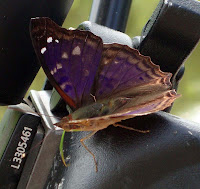 We were back at Manu Wildlife Center for lunch and an afternoon break. During the break I walked a trail, in my efforts to get to know the layout of the network.

This is a Clymena Eight-eight, Diaethria clymena. There are actually several species of eighty-eights, but this is the classic form that give the group its name. 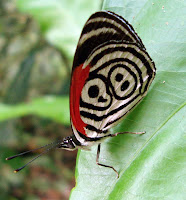 A hairstreak in the genus Theritas. 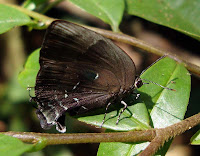 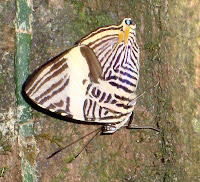 This damselfly appears to be a female Mnesarete cupraeus, the same species I photographed 3 days ago at Amazonia Lodge. 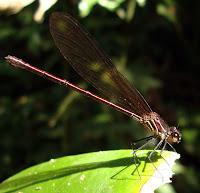 In the late afternoon we returned to the same trail belonging to Tambo Blanquillo lodge that took us to the oxbow lake, but this time we had the key to tallest canopy observation platform in the region. 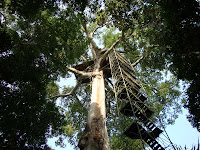 Here we go up. Looking at the trunk of this Kapok tree face-to-face was awesome. Huge. 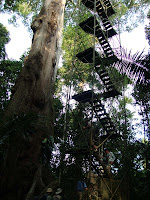 Once at the top, we constantly listened and scanned for birds that live in the top of trees. Below is the lake that we cruised before lunch. 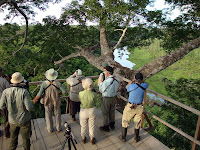 There were plenty of interesting things in our own tree, such as this huge-headed, but harmless ant. 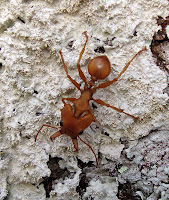 Here’s a view over the huge boughs in the other direction. 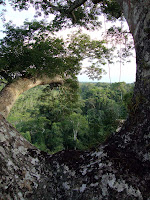 One of the best birds we saw was this female White-throated Woodpecker. Low afternoon light and great distance made digiscoping a challenge, but the distinctive red nape patch and pale background to the barring on the flanks can be seen here. It also had an obvious white throat. 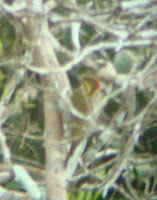