Today began just like any other, only when we were sitting at breakfast, we heard thunder. We’ve had such great luck with the weather.

By 5:30 we were in our 40-foot boat, huddled under ponchos, and bearing down for what looked to be a very long day. 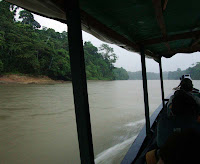 But the one shower we rode through was short-lived, and the sky began improving right away. The cloud formations were unlike any I had ever seen.

Time passed quickly enough, with the scenery racing by. The closer we got to Puerto Maldonado, the more we saw these dredgers looking for gold. There were a lot.

This clambering vine had buried itself in purple blossoms.

We didn't disembark for birding, but the boat did slow down a few times when we passed by birds of interest – such as a group of Jabirus (a gigantic stork), and a large piece of driftwood decorated with 70 Sand-colored Nighthawks. We ended up with 68 species during the ride.

Eight and a half hours later we were disembarking in Laberinto – the first town with a road. Here we met our bus and driver, Fruti. 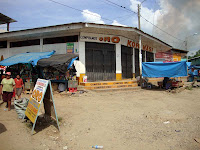 We bid farewell to Carlos and Pancho who had to turn around and make the 24-hour boat ride back to Atalaya. 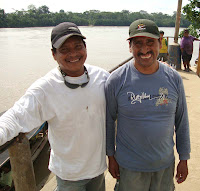 We still had a few hours in the afternoon heat to look for birds. One place we stopped was this Moriche palm grove. There are several birds that specialize in this one species of palm. 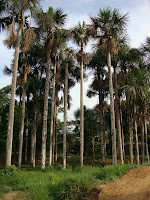 Such as this Red-bellied Macaw. 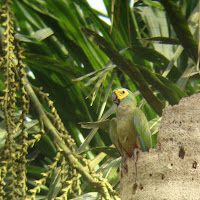 We then birded a side road just on the outskirts of Puerto Maldonado where we found a family group of Purus Jacamars. 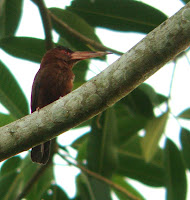 It was strange being in a busy town after all these days in the jungle. This is the primary form of the taxis here. 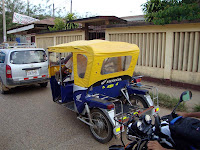 Posted by Birdernaturalist at 12:54 PM