This was our last day in Peru, and all plans revolved around the flight back to Lima, followed by our late night departures back to the United States (or Europe, in one case).

But the travel didn’t take all day, and we had a total of 3 hours’ worth of birding today – and tallied 94 species in the process.

First we birded near Puerto Maldonado, checking the side road where we had the Purus Jacamars yesterday. They were still there today.

But in addition to them was also a family group of White-throated Jacamars, a lifebird for everyone present. Many thanks to Barry Walker and other birding tour groups who staked these out for us. 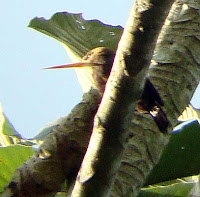 We then birded some open country nearby where we found Southern Caracara and Grassland Sparrow.

Yesterday we also had Southern Lapwing and Burrowing Owl near here, both recent immigrants to this area, once all rainforest (and again thanks to birders who came before us; it sometimes does pay to be the last ones out).

Then it was time to show up for our flight to Lima.

A shock to the system was the cool, marine air that greeted us. And lots of very, very different birds. Here we are in the Lima suburb of Ventanilla.

Peruvian Pelicans (like Brown Pelicans, only much larger, and formally split from them just two years ago).

A Great Grebe on a nest. It sports an amazingly long neck. 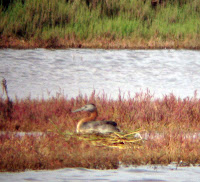 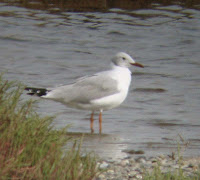 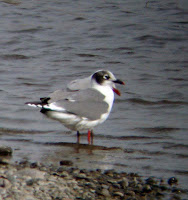 A view of the marsh, which also hosted many Common Gallinules, Slate-colored Coots, White-tufted Grebes, Cinnamon Teal, and Black-necked Stilts. A nearby mudflat had Killdeer, a Western Sandpiper, a Collared Plover (a rarity this far south on the coast), and Yellowish Pipit. Sadly, we did not find any Peruvian Thick-knees here.

Some seawatching also produced many Peruvian Boobies, a Red-legged and two Guanay Cormorants, an endless stream of Kelp, Gray, and Belcher’s Gulls, and a single Elegant Tern. Impressive was a huge, swirling flock of Sanderling over the distant end of the beach, probably numbering well over 10,000 birds. Big migrating flocks of Black-bellied Plovers and Ruddy Turnstone also joined them.

Here’s a rundown of the supporting cast, a really great group of people to travel with. 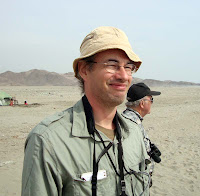 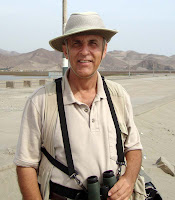 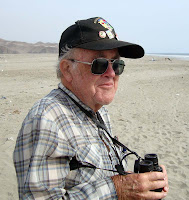 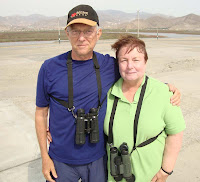 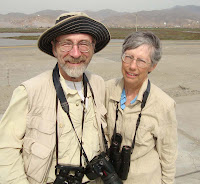 And of course, I shouldn't forget Gary Rosenberg, the leader, and the many drivers and boat pilots.

Posted by Birdernaturalist at 1:24 PM