A Stranger in the Yard 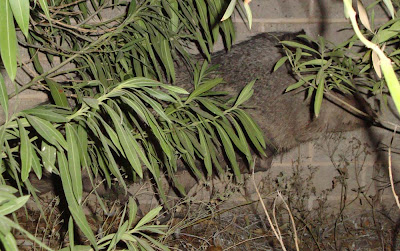 Caught here mid-leap, just after 11:00 p.m. on this past Tuesday night, is a Collared Peccary that was in our yard in north-central Tucson. We are just about 3 miles north of the University of Arizona, and this is quite an unusual location for this pig-like animal, known locally also as javelina. I was just drifting off to sleep when I heard some rustling outside and thought there might be a burglar or some other unwelcome person trying to get into our garage. Instead here was this exciting find, rooting around in the compost pile. My friends Brad and Alice had one in their yard at Rancho Prince just 1/4 mile south of here a couple years ago, and I saw one dead in the middle of Campbell Ave. between Fort Lowell and Prince a few months ago. Maybe the drought has pushed more animals down into the lowlands as they run out of food and water in their normal haunts. They are common in the Catalina Foothills just a couple miles north of here but rarely cross the Rillito River into urban Tucson. Even Greater Roadrunner is a rarity here (one sighting in our yard in almost 12 years).

Peccaries are a family (Tayassuidae) of three species found only in the New World, and though often called "wild pigs" they are only distantly related. Peccaries differ from pigs (family Suidae) in many ways, such as having two or three instead of four hind toes; having a tail with less than half as many caudal vertebrae; having precocial young (fully furred, eyes open, ready to run upon birth), and having a different dental arrangement.
Posted by Birdernaturalist at 1:33 PM